Abi is a 17 year old student who enjoys running and martial arts. She is also passionate about Art which is one of her college subjects. She stops at a bench in the park after completing a run where she is harassed by Reggie and Germain who are also students. Leo is a homeless man who is asleep on the next bench but is awoken by the sounds of Abi’s protests as the boys try to massage her shoulders. The boys leave the scene after being threatened by Leo.

Leo always has a sketch pad with him because he is an ex Art lecturer and it sparks a conversation between himself and Abi. He tells her how he came to be homeless which is revealed in a series of scenes.

First he is asked by a stranger in a pub to deliver a package in return for a drink. When he arrives at the address two police officers, DS Stone and DC Coleman, are waiting for him and he is arrested. When the police check out his story Stefan, the barman at the pub, denies all knowledge of the stranger who is known as Glass, a dangerous drug dealer and people trafficker who is known for cutting up his enemies. In spite of giving the police a drawing of Glass Leo is sent to prison.

There he meets an inmate nicknamed ‘Paranoid’, so called because he lives in constant fear of attack from enemies both inside and outside the prison. Paranoid smuggles a knife out of the prison kitchen by concealing it under a cake and Leo is blamed for the theft which results in his sentence being extended. Leo talks of the distress he felt when Claire, his girlfriend, stopped writing to him. Upon his eventual release from prison Leo goes to his old address and is told by Rose, his old neighbour, that Claire has left, married another man and has a young baby. When Leo goes to his bank to draw out money he finds that Claire has closed the account and taken all their savings.

Leo asks Abi to look after some drawings for him but she offers to frame them and get Mario, the owner of the cafe where she works, to sell them.

Chloe, Abi’s sister, questions her about the mysterious artist whose drawings Abi is helping sell.

Claire has returned home to visit her parents when Leo sees her in the park with her baby. When he asks why she left him and took all the money they had saved she blames his relationship with alcohol and says it is only what he owed her in view of the amount he spent on drink.

After taking a call from Mario, asking for more of Leo’s drawings, Irene, Abi’s mother, quizzes her about Leo.

Reggie and Germain observe Abi giving an envelope full of money to Leo and receive in return a package of drawings. Included in the pack is the drawing of Glass which Leo wants her to keep for him. The boys think that there are drugs in the package and surmise that Abi might be selling them to college friends. When Leo gives Abi a hug they also think that the pair are in a relationship. Reggie and Germain decide to share their suspicions with Abi’s parents.

Irene, tells Abi what Reggie and Germain had passed on to her. Marcus, her father, informs Abi that she will have to leave home and not be funded to go to University if she sees Leo again.

Abi disguises herself in order to meet Leo in the park. She tells Leo that her parents will not allow her to see him any more and about arrangements she has made to enable his drawings to continue to be displayed and sold in the cafe.

Three and a half years later after Paranoid unexpectedly calls on Leo who is living in a squat and pays him £500 to collect a rucksack for him, which he says contains items left to him by his mother.

Stefan is in Mario’s Cafe hiding behind his newspaper when Paranoid enters and tells Mario that he wants to buy a drawing displayed in the cafe which shows himself carrying a cake with a knife underneath it. When Stefan overhears Paranoid tell Mario that he will return the next day to pick it up he telephones Glass. Stefan gives Mario £20 and instructs him to call a certain number as soon as Paranoid arrives.

Leo asks a homeless man in his squat if he has seen Paranoid, saying that he has a rucksack belonging to Paranoid. DS Stone and DC Coleman appear and take the rucksack and arrest Leo in connection with the murder of Paranoid who has been found dead in an alley next to Mario’s cafe.

DS Stone and DC Coleman accuse Leo of the murder of Paranoid because Leo’s drawing of Paranoid carrying a cake with a knife underneath it is found on the dead body.

Irene draws the attention of Abi to an article in the local newspaper which suggests that Leo has been arrested for the murder of Paranoid. Abi realises that she must go to the police because she has a drawing of Glass and information that could be vital to the case.

Stefan is interviewed by the two detectives and eventually reveals that he contacted Glass when he recognised Paranoid. He also admits to making a false statement to the police which resulted in the imprisonment of Leo.

Abi gets a letter to say that she has a place on a master’s course at the university. Her parents reveal that they can no longer support her because her father will shortly lose his job. She agrees to postpone the master’s course and look for a job to get some experience.

Abi appears for interview at a new gallery, which unknown to her, belongs to Leo. When she arrives she does not recognise him because he has shaved off his beard and talks in an American accent. After revealing his true identity he offers her the job and explains how his fortunes have changed. Just before the guests arrive for the launch of the new gallery Glass appears. He has come to kill Leo because Leo is the only one who can testify against him following the mysterious death of Stefan in prison. A fight ensues during which Abi uses her Martial Arts skills to overpower Glass just as the Police arrive to make an arrest.

I would like to thank the young Greek philosopher ALEXANDER KONSTANTIS for the inspiration for the title of this play. 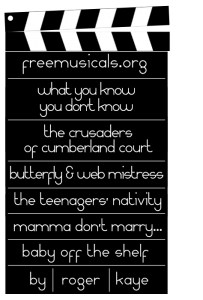